Rick Warren is the author of Purpose Driven Life; one of the best selling religious books of all time.
He pastors Saddleback Church; a multiracial mega church in California and prayed for Barack Obama when he was inaugurated as President of the United States of America.

Therefore, it came as a huge surprise to many when Matthew Warren, youngest son of Pastor Rick Warren took his own life by shooting himself to death. How could the son of such a prominent Man of God do such a thing, many asked. 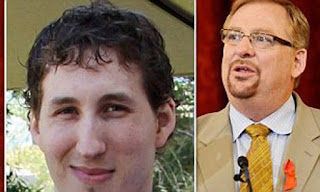 He’d been to numerous hospitals for treatment all to no avail. He’d been prayed for and counseled but that too yielded no result. Reading the Bible also did not offer any respite. The situation seemed hopeless.

Reliable sources said Matthew’s bipolar got so bad that at a point he resignedly told his parents he was willing and ready to die.

He said he was a Christian and sure of his place in eternity. Yes, he’d go to heaven, he surmised. And since God could not heal him wasn’t it better for him to die than to be alive and be subjected to unending emotional and mental torture?

No parents want to experience their child go through such pain and the Warrens were no different.

It was said Matthew once enquired from his father how and where he could buy a gun.

Pastor Rick Warren and his wife never gave up hope. They kept claiming the promises of God for their son’s healing and asked other believers to lift him up to God in prayer.

But it all came to nothing because on Friday, April 5th 2013, Pastor Rick Warren and his wife visited their son and realized he’d taken his life by gunshot.

The grief the dejected parents faced can only be imagined. They mourned and honestly opened up on their late son’s bipolar.

Questions began to emerge from all quarters. Is the Church really doing enough to support people with mental health problem?

How many Christians can honestly share their mental health problem with a fellow Christian without being seen as lacking faith or awkward?

Truth is, every problem in life does not just require spiritual solutions: doctors and mental health practitioners are not there for nothing.

No one is condemned or ridiculed if they are suffering from Cancer or diabetes so why should Mental Health patients be stigmatized?

I pray God will give Christians the grace, empathy and humility we need to truly be our brother’s keeper.

Prophet TB Joshua To Be Buried At The Synagogue Church, Lagos – Church statement