As part of our obligation to enlighten more Christians about events to come, we have taken time out to have an in-depth look into the consequences of missing the rapture.

Rapture: The rapture is an eschatological concept of certain Christians, particularly within branches of American evangelicalism, consisting of an end-time event when all Christian believers who are alive, along with resurrected believers, will rise “in the clouds, to meet the Lord in the air.”

Below are some of the reasons why you shouldn’t miss the rapture.

1.You Miss a Chance to Enter Heaven Without Tasting Death.

Our Lord, Jesus Christ, said in Mathew 16:28 that there were people would not taste of death till he returns. He was basically talking of the saints that will be raptured at the time of His coming. Apostle Paul emphasized later in 1 Thessalonians 4:17 that we which are alive shall be caught up with the Lord in the air.

It is a great blessing to be among these set of believers that will be transformed from corruptibility and take on incorruption and enter the kingdom of God without tasting death.

This opportunity of escaping death is reserved for the raptured saints only. Whoever misses the rapture has missed the chance even if they enter heaven as tribulation saints (revelation 20:4). 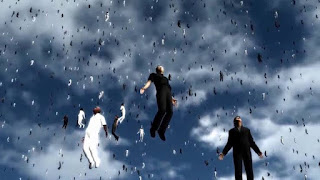 2. You Miss The Marriage Supper of The Lamb
Sometimes in 2011, a royal wedding, which the world has not witnessed its kind in recent times, was conducted. It was a royal wedding, indeed. The wedding was full of glamour and splendor. It was a wedding that everybody had wished to witness.

Concerning the marriage Supper of the Lamb, The Father God, Himself, says the wedding banquet is ready. In Mathew 22:4, He says He had prepared His dinner and He personally sends invitation to you to come to the wedding. All the angels in heaven, all the saints in glory- Abraham, Isaac, Jacob, Noah, Moses, Elijah, Mary, Peter, Paul, John The Baptist and so many more are eagerly anticipating this event (Revelation 19:6-9). They cannot wait to witness this once-in-an-eternity event where the Lord, Jesus Christ, will be spiritually joined to the true church in indescribable glory, light, beauty and majesty.

If Angels in heaven do not want to miss this event, then you cannot afford not to be there, either.

3. You Will Never be The Bride of Christ
The raptured saints are the only ones given the privilege to be the bride of Christ. Even if you miss the rapture and still make heaven as tribulation saint by rejecting the mark of the beast and standing for Christ till the point of gruesome death in the hands of the antichrist, still, you will not be the bride of Christ. The wedding of the Lamb of God will have been concluded before you arrive at heaven and will not be repeated because of you. It is a once-in-an-eternity event.

What is the big deal about being the bride of Christ? You may say. After all, I can still make heaven as tribulation saint. My brethren, there are lots of big deals. In any wedding, the bride is the cynosure of all eyes. Everybody wants to treat the bride with utmost care and grace.

4. You Will Miss the Crown of Righteousness
The Scriptures says in 2 Timothy 4:8 that a crown of righteousness is prepared for those that love His appearing. To love His appearing means that you are watching, preparing and waiting patiently for His return. Since you fail to make the rapture, it most likely means that you not watching, not preparing and not waiting patiently for His return. It may also means, perhaps, you are careless in your watching and preparation.

This crown of righteousness is a super glorious crown. The Lord in His faithfulness and mercy had shown this crown to me as He has been showing and is still showing it to His other children. My brethren, I beg you not to miss this crown. Watch, Prepare and wait for Him.

5 You Can go to Hell Without Warning
Of all the dangers of missing the rapture, this is perhaps the most dangerous and yet the possibility is very great. Let me analyze as below.

As the trumpet of rapture sounds, three principal distinguishable events will take place. They are

i the dead in Christ resurrect and the living saints in Christ are caught up with them. This is rapture.

ii Sudden destruction takes place. This means a lot of people will die as a result of disasters that accompany the sudden disappearance of people (1 Thessalonians 5:3, Jeremiah 25:33).

Some few years ago, I was fasting and reading the book of revelation. When I read revelation 6:8, I stopped and began to meditate what how that death and hell were released and power was given to them over a fourth part of the earth to kill. I stopped and began to calculate what a quarter of the world population was. At that time, it was well over a billion. As I was wondering how this scripture would be fulfilled, I slept off. And in a dream, I was given a book and a pen to write some things. One of the things that was told me to write was that on the day of rapture, about 1 billion would die as a result of sudden destruction. And that all these people would go straight to hell. I was told that it was on that day that the death and the hell that were released in revelation 6:8 would finish their assignments.

When I woke up, it was ministered to me further that that was the reason hell was released to follow to follow death.

If you will not make the rapture, then you have a considerable probability that you will be consumed in sudden destruction of rapture and go straight to hell without notice. If a person is terminally ill and has been told that he cannot survive the sickness by the doctor, at least, that person has some notice and time to make amendment of his life before he dies. It is not like that with whoever will be consumed in sudden destruction since nobody knows the day of rapture. I am sure you do not want to be in this dilemma.

iii the rest of people that miss rapture and escape sudden destruction go into the wrath of God.

If you missed the rapture but are lucky enough to escape the sudden destruction, then certainly you will drink the cup of wrath of God in the great tribulation. The only group of people that will spared from the wrath of God during the great tribulation are the people that God have sealed for protection at that time and these are the 144,000 from the 12 tribes of Israel (revelation 7). The two witnesses of God and whoever God may have ordained for a special assignment at that time may also be protected.

What we are experiencing now is not the wrath of God. The wrath of God will be poured out after rapture and whoever does not fall into the category of people specially protected at that time will face that wrath. The only thing that is withholding the wrath of God from being poured now is because the bride of Christ had not been removed. God waited for Noah to enter the ark before He poured flood on earth. He waited for Lot to go out of Sodom before He rained fire on the cities. In the same way, God is waiting for the bride of Christ to be removed and then He will poured His wrath on the earth and its inhabitant at that time.

7. You May Face the Wrath and Persecution of Satan
The Scripture says in Revelation 12:12

12 Therefore rejoice, ye heavens, and ye that dwell in them. Woe to the inhabiters of the earth and of the sea! for the devil is come down unto you, having great wrath, because he knoweth that he hath but a short time.

After rapture, Satan will be persecuting the believers that are left behind with great wrath and persecution. Wearing the mask of the antichrist, satan will deny anyone who still profers the name of Jesus Christ, the opportunity to buy and sell until they deny and renounce the Lord, Jesus Christ. If they remain adamant, they will be tortured greatly and eventually beheaded for staying with Christ.

If you consider that God, also, will be pouring down His own wrath, as well, upon the people who missed the rapture and also escaped the sudden destruction, this makes it an assault of magnified proportion- wrath of God combined with persecution of Satan. Nobody believer should desire to go through this situation.

8. You Will Be Abandoned by God
The Time after the rapture is a time that God will abandon all believers that are left behind at rapture. At that time, no prayer will be answered again. The blood of Jesus Christ will seize from flowing again because the blood will have concluded its work at rapture. Hence, there will be no blood covering any more. The Spirit of God who helps believers will have been withdrawn by God as was in the time of Noah. There will therefore be no more help for any believer at that time anymore.

If you now consider that the antichrist will have forsaken the gathering of all believers all over the world at that time and will have decreed that only him be worshipped, then there will be no gathering where believers can at least strengthen one another. It is going to be a real ‘on your own’. Such a believer will be all alone, vulnerable to all attacks of the enemy without defence, till he loses his life by beheading.

The Father left The Son on the cross till the Son finish the work of the cross and declared ‘it is finished’. The Son abandoned the three Hebrew boys till they were cast into the fire. Any believer who misses the raptured will be abandoned by God till such believer pays the ultimate price for his negligence and carelessness. Strive not be such a foolish virgin.

CONCLUSION
You can see that the rapture should be a ‘no-miss’ for all believers. If perhaps, you have had a contrary opinion before this time, you can still make amends. After all, the trumpet has not sounded. Make a new determination today and stand by it. If you need help, ask the Spirit of God to help you. He is still available. Very soon, the Spirit and the Bride are withdrawn and all great tribulation breaks loose.

SUMMARY
We have seen from above that the losses of missing the rapture are too enormous for any wise believer to consider. The chance of being consumed in the sudden destruction is very great and eternally threatening. The likelihood of rejecting the mark of the beast is almost non-existent. The risk of not worshipping the antichrist is suicidal. The reality of being abandoned by God is heartbreaking and unbearable.

In overall, the only viable and profitable option is to make the rapture and escape all these things that shall come to pass shortly.

For opinions and contributions, make use of the comment box below.

Here is why Pastor Kumuyi was expelled from his last church before he started Deeper life Bible Church.