Churchng.com
Home Uncategorized Should a Woman Preach or Teach in a church, All you need...
Facebook
Twitter
Pinterest
WhatsApp
The debate about whether a woman is permitted to lead or teach(pastor) in the church continues to intensify.
Although women have traditionally fulfilled supportive roles in serving the church and gained their greatest joy and sense of accomplishment from being wives and mothers, the feminist movement has successfully influenced many women to abandon these divinely ordained roles. 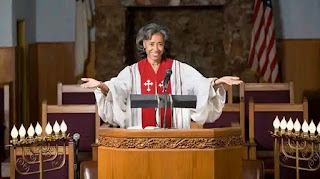 Unfortunately, this movement has made headway even in the church, creating chaos and confusion regarding the role of women both in ministry and in the home. Only in Scripture can God’s intended design for women be found.
Two Views on Women In Ministry
Complementarians
Complementarians believe that God has distinguished roles for men and roles for women in the church. The two are equal but different. Particularly, this view does not ascribe to women in the role of teaching, preaching, or leading, specifically in the church context.
Egalitarians
Egalitarians believe that God has not distinguished roles for men and women in the church. The two are equal and free to serve in whatever function in which they feel called within the church.
Below are the Biblical texts and people you should know about in order of importance.
Scripture passages that suggest women should not lead and teach in the church:
1 Timothy 2:12-15 “A woman should learn in quietness and full submission. 12 I do not permit a woman to teach or to have authority over a man; she must be silent. 13 For Adam was formed first, then Eve. 14 And Adam was not the one deceived; it was the woman who was deceived and became a sinner. 15 But women will be saved through Childbearing—if they continue in faith, love and holiness with property.”
So much of our interpretation of women in church leadership hinges on the understanding of the word authority in this verse. There are some critical considerations about the word “Authority”.
1 Corinthians 14:34-35 “Women should remain silent in the churches. They are not allowed to speak, but must be in submission, as the law says. If they want to inquire about something, they should ask their own husbands at home; for it is disgraceful for a woman to speak in the church”.
It might appear on the surface that a woman is not permitted to teach in the church. But a quick look at the context dispels such an interpretation.
Genesis 2:20b “But for Adam no suitable helper was found”.
This verse is typically used to suggest that the woman has a specific role, namely ‘man’s helper’. More specifically, this role is defined as a lesser role, not a role of leadership or authority but a role of submission. I.e. the man needed some help so God made a servant for him.
Scripture that Affirms Women in Leadership:
Acts 18:24-26 “Meanwhile a Jew named Apollos, a native of Alexandria, came to Ephesus. He was a learned man, with a thorough knowledge of the Scriptures. 25 He had been instructed in the way of the Lord, and he spoke with great fervor and taught about Jesus accurately, though he knew only the baptism of John. 26 He began to speak boldly in the synagogue. When Priscilla and Aquila heard him, they invited him to their home and explained to him the way of God more adequately”.
It is clear from this passage that a woman, Priscilla, instructs a man, Apollos. Furthermore, there is nothing in Acts to suggest that this would be unacceptable.
Romans 16:6-7 “Greet Mary, who worked very hard for you. 7 Greet Andronicus and Junias, my relatives who have been in prison with me. They are outstanding among the apostles, and they were in Christ before I was”
The likely choice of the name Junia has some important implications. Not least of which is that it ascribes the gift of Apostleship to a woman. This is yet another example of a woman holding one of the highest roles of authority in the New Testament Church.
Acts 21:8-9 Leaving the next day, we reached Caesarea and stayed at the house of Philip the evangelist, one of the Seven. 9 He had four unmarried daughters who prophesied.
Here we simply see the designation of Phillips daughters as prophets, thus again showing that there are no roles that are forbidden to women.

Here is why Pastor Kumuyi was expelled from his last church before he started Deeper life Bible Church.