A brother took a sister to an eatery to propose to her! Before the proposal, the brother began an opening prayers. He prayed earnestly and spoke in tongues for like 30 minutes, calling “FIRE” “FIRE” to destroy every environmental power.
Before he finished praying the sister was already on her way to her house while the waiters & some customers in the eatery were already on their kneels saying “amen” to the brother’s prayers! The brother left there with anger when he discovered that the sister he was in love with had disappeared. 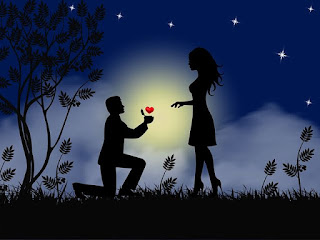 My dear brother in the Lord, you don’t need to propose to a lady as if you are in a prayer meeting or deliverance service! You don’t need to send down fire or start casting out demons while you are trying to tell a sister how much you love her!
Wake up! You are not in a crusade ground my brother! You don’t need to spiritualize your marriage proposal. You ought to behave like a lover boy not as an apostle, a prayer warrior or a revivalist when you want to propose! There is time for everything!
Some of our brothers need to be smart and learn to be romantic! You can be holy and be romantic. You need to learn how to pass your romantic message across to a lady you love without sounding like a missionary or an evangelist.
When you love a sister, go straight to the point! You don’t need to start quoting Song of Solomon. She knows it!!! Just Tell her and show her how much you love her if you are truly convinced she’s the one.

And never tell her “Thus says the Lord you are my wife”! Thus says the Lord ” you are my wife” is not scriptural. It is a form of manipulation and spiritual intimidation. Propose marriage as a lover boy not as an “apostle” or a “revivalist”. Never make your marriage proposal as a mandate from God.
Many years ago, one of my friends fell in love with a very beautiful lady in our church but refused to talk! Any time he met with the sister, he would be quoting scriptures and sharing revelations!
I told him to go straight to the point since he had prayed about her and gotten the confirmation. But he never listened.

He kept quoting the scriptures and sharing his revelations until a SMART Christian brother from another church proposed to the sister! Within a year, she was taken to the altar!
The “Unsmart” brother regretted.

When you love someone and convince about her, don’t speak in parable. Tell her how much you love and how you like to have her as your beloved wife.
May God give you the spirit of boldness and wisdom to go about it.